The Shotgun is thrilled to present an exclusive and entirely real roundtable with honored representatives from Eris, Witches and Heiress, three of downtown's most notorious underground parades. Eris has been around since 2005, with Witches coalescing in 2012 and Heiress forming in 2013 in the wake of (and partly in reaction to) the 2011 NOPD assault on Eris. We spoke to these anonymous spokesfolx about how their no-throwing bullshit parades have been adapting to the changing landscape of New Orleans.

SHOTGUN: Can you start us off by describing your 2019 theme?

ERIS: Our theme for the year is "The Triumph of Safety." It's what we spend the bulk of our meetings obsessing neurotically over, and of course Eris is the Goddess of playing it safe.

That said, there were some within Eris who felt "The Splendor of Silent Respect" was an important theme, and since we're all pathologically conflict-averse we did our best to accommodate that by folding these themes into one another, like a beautiful lacework polyhedron woven by iridescent caterpillars wearing tiny flower crowns.

HEIRESS: Our theme's difficult to sum up in a few words, but I would characterize it as a mostly Tiqqunist détournement of the 1873 Comus "Missing Links" parade. We worked very hard on the poster text; anyone from Comus who reads it will have to admit total ideological defeat. This is definitely the end of Comus. The critique is unsurvivable.

SHOTGUN: Any new developments or features for 2019? 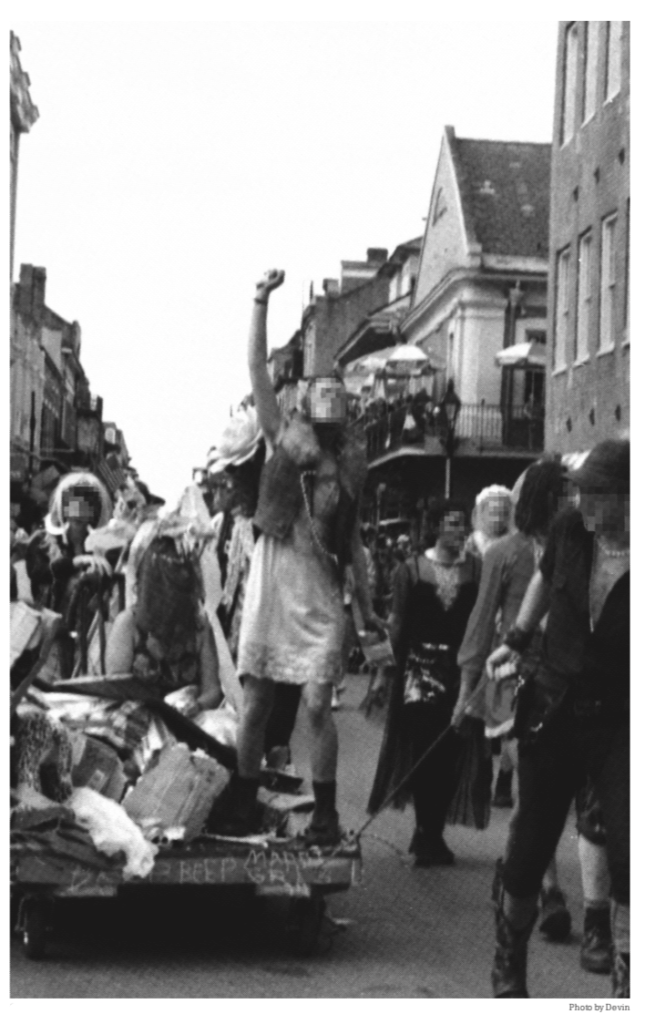 ERIS: We're going to kick off Eris 2019 with some new music, a stirring 40-minute a cappella original called "Ode to Allyship." It's mostly hummed and murmured; we ask everyone close their eyes during it because eye contact may frighten the choir and make them feel unsafe.

WITCHES: This year we have a Red Bull sponsorship, which has let us significantly upgrade our sound and light systems. Think "Endymion x Buku."

HEIRESS: We've been trying to link up with the Sewerage & Water Board, who we consider inspirational. They wear reflective yellow vests and destroy infrastructure, how cool is that? Unfortunately, our outreach efforts didn't take into account how few of them use Signal.

ERIS: We are very sensitive to the accusation that by parading at night, or during the day, or at all, we might make people feel unsafe. For example, plebs viewing the glorious costumes we've spent six months crafting might feel jealousy and wonder, which are unsafe emotions. So this year we're parading from the End of the World to the big warehouse where the Music Box is; we've paid to rent it for the day. Once inside, the "parade" will then tiptoe around in a circle while the choir softly weeps. Our Police Liaisons will make sure everyone's Safe. It'll be a really sacred and special magical ritual.

WITCHES: We've mapped out the neighborhoods that have least law enforcement so we can really rampage through them. Then we're going to have an all-night rave afterparty inside the St. Margaret's old folks' home. The afterparty theme is "Queefs," not butt farts, so everyone should bring a change of costume. If you wear the same thing for the parade and the afterparty we'll softblock you on Instagram.

HEIRESS: Our route is a secret, because if potential attendees knew we were going to literally attack the police station they might be scared away.

SHOTGUN: What challenges are you working to overcome?

HEIRESS: We've having issues with people calling our parade a "march," which it isn't. It's definitely a parade, a very authentically New Orleans parade. Not a march, not a protest. Marches and protests are liberal. The giant "Abolition of the Wage System" banner last year was ironic.

WITCHES: We built a bunch of 50-foot-tall neon-lit monster trucks out of welded-together shopping carts, and they might be too wide to fit onto the Danziger Bridge. Shane Smith has a special party barge standing by to ferry us across the canal if necessary.

ERIS: There's enormous concern that the choir and flag corps didn't get enough attention. As children, mostly, but then also more recently in Eris. With so much negative political energy in the air, we worry about Eris straying from its true purpose, which is to gin up an appreciative audience for the antics of aging Bywater artfags. And of course, safety is paramount.

SHOTGUN: Do you have a contingency plan to deal with the possibility of police attack?

ERIS: Police physically attacking the parade is their way of telling us we aren't being safe enough. We need to take that critique seriously, because many of the police are people of color. The key is to preventatively police ourselves as much as possible. I mean, what if someone in the parade littered, and a poor person saw the litter? Can you imagine? Just thinking about it gives me a panic attack. The less we're a parade at all and the more we're just a static, lugubrious art event, the safer we get. Hail Eris!

HEIRESS: Our "scatter in panic" response strategy hasn't been an overwhelming success, but we're continuing to fine-tune it. And of course, you don't have to outrun the bear, you just have to outrun the person next to you, which is easy when he's a drunk oogle who thinks this is Austin.

WITCHES: I'll be real with you, I'm rolling face right now and I'm not even sure what police are. Like, I think I can picture them? Sort of? But they don't have a meaning. And anyway it's just a parade. What's the big deal? It's Mardi Gras or whatever. We always parade on Mardi Gras night. I'm thirsty. It's fine.