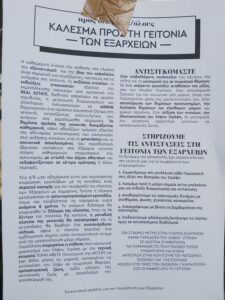 A CALL TO THE NEIGHBORHOOD OF EXARCHEIA

The daily intensity of the attack, in the context of gentrification and the violence of capital, is wide-ranging for workers, residents and political movements in the neighborhood. The rent increases, the evictions of tenants due to exploitation by REAL ESTATE predators, international capital and big investors, the conversions of apartments and entire buildings to AIRBNB, all ​​create a huge housing problem in the neighborhood, displacing those with lower incomes. The neighborhood's public schools are challenged every day, with classes emptied due to the inability of families to respond to rent increases, while the immigrants and the socially excluded who traditionally found refuge in Exarcheia "disappear" to detention centers or elsewhere, the targets of daily police operations ordered by the Municipality of Athens.

On August 9 at 4:30 a.m. there was an unprecedented operation by contractors accompanied by an occupying army to fence off Exarcheia Square with sheet metal. Since then, the square has been turned into a police-controlled construction site, as it's expected to remain for the next 8 years. In the next phase, they will excavate the square, the 70 trees in the square will be cut down, the only square in the neighborhood will be destroyed and political resistance will receive an irreparable injury, since the Square has been an emblematic point for counterpower movements from the post-colonial period through today.

At the same time, the attack on the social character of Strefi Hill is underway with the consttruction company TOMI AVETE (A subsidiary of AKTOR) having started the machinery to turn the hill into a tourist resort, a commercial zone, an area of social control that will result in its sterilization.

LET US SUPPORT THE STRUGGLE:

The forces of repression have occupied our neighborhood for the interests of businessmen.

NO METRO STATION AT EXARCHEIA SQUARE

NO HANDOVER OF STREFI HILL TO PRIVATE INTERESTS

POLYTECHNIC WILL REMAIN A PLACE FOR MEETINGS AND RESISTANCE

FIGHT BACK AGAINST THE CULTURE OF RACISM, SEXISM AND AUTHORITY

MAFIA OUT OF THE NEIGHBORHOOD

— Coordinated Action for the Defense of Exarcheia