Rape and abuse are not isolated incidents. They happen every day, whether or not we hear of them. They're done by everyday people, fathers, friends, neighbors, colleagues, bosses, spouses. They happen due to the pervasive rape culture piled on our shoulders every day through unwanted harassment, looks, touches.

Rape culture oppresses and harms our bodies and souls. Rape is a system of control and enforcement over non-dominant gender identities, identities that do not fall within the cis heteronormative framework. The culmination of this power over our lives is our social and physical extermination, reflected in one of the predominant causes of female death in the West: femicide.

The state, the judiciary, the police, the church and the media cover up and perpetuate the patriarchal violence inflicted on us, which is to their advantage. It is not uncommon for the above institutions to produce racist propaganda in cases where the perpetrator is not Greek. Of course, since the state is reproduced and fueled by systems of oppression and exploitation such as capitalism, patriarchy and nationalism, this does not surprise us. This cynical manipulation infuriates us! We are constructing anti-patriarchy and anti-patriotic defenses against any would-be savior. For us, RAPISTS ARE NOT A SPECIAL BREED, THEY ARE EVERYDAY MEN.

On June 19 one of our sisters was raped and abused while working. This woman is a housecleaner for a cleaning co-op. We all know the meager, precarious and miserable conditions that characterize this industry. It's a labor force that's overwhelmingly female and exposed to sexism and sexual harassment with no frameworks of protection from the state or employers. It is a fact that gendered violence is so standard as to be routine. However, it is also indisputable that if you are a refugee, a refugee in a camp and/or a LGBTQI+ worker who doesn't conform to heteronormality, you are attacked more intensely and more often by various forms of patriarchal violence.

SOLIDARITY, POWER AND LOVE TO OUR WORKING SISTER AND TO EACH AND EVERY ONE OF US.

WE ARE HERE, WE ARE MANY, SCUMBAG SEXISTS & RACISTS GET THE FUCK OUT. 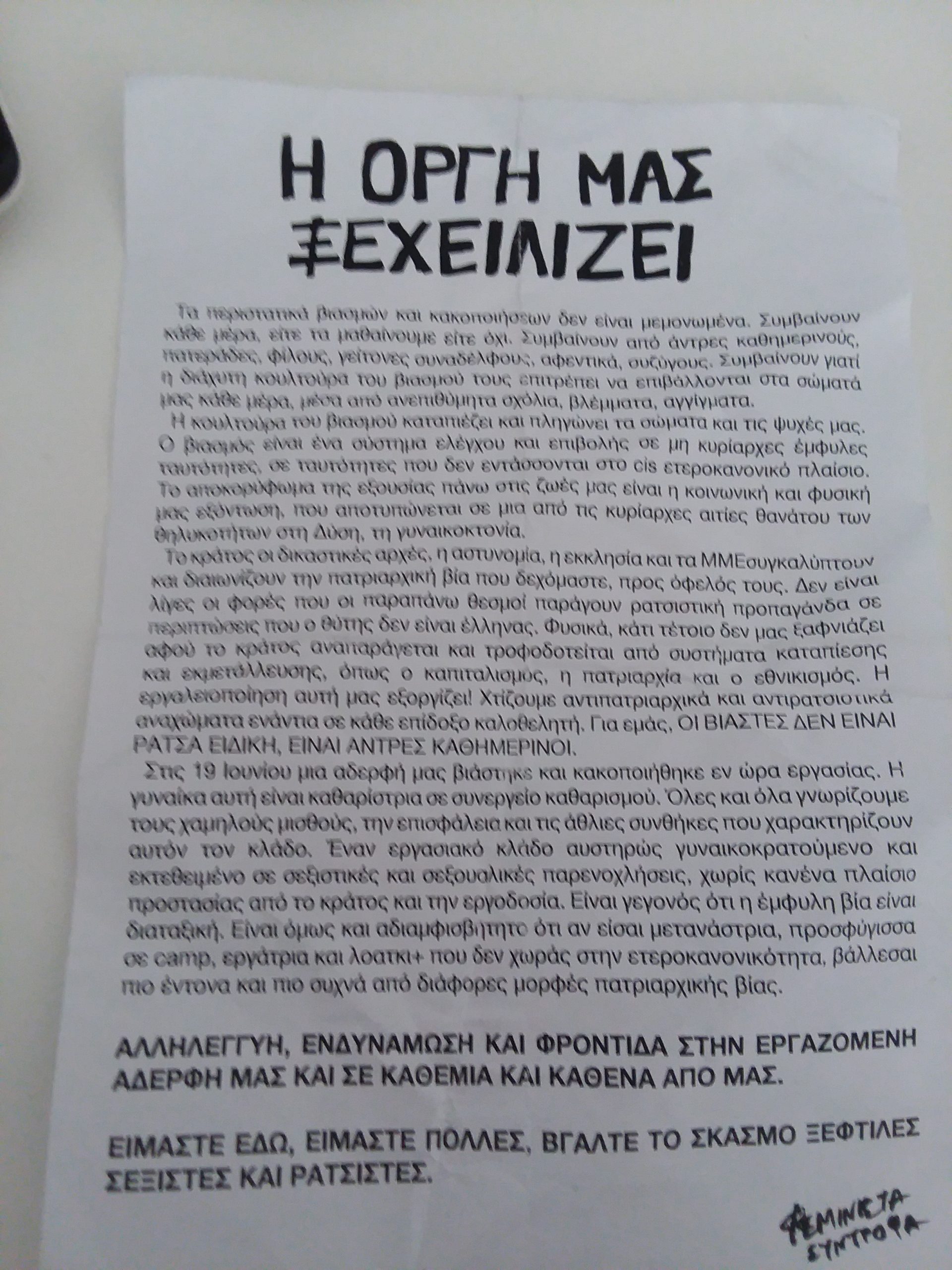