You may or may not be familiar with the American anti-imperialist org "Black Hammer," a political group that's become an enduring object of obsession to a number of loud so-called leftists online.

In their own words, Black Hammer is "a revolutionary mass organization dedicated toward building a sustainable future for all colonized people worldwide." While I'm no authority on them or anything else, I would lazily characterize them as a Black autonomist group with an anticolonial focus.

The reason I am writing about Black Hammer, and the reason a lot of people have heard of them, is because they're a grassroots revolutionary organization that embraces and exploits online viral notoriety and the concept of themselves as a brand. They've built awareness of their organization in large part via cultivating pious outrage among whites.

There is plenty I admire about Black Hammer, including their viciousness and the way they seem to feed off normie disapproval. To whatever degree they are in practice an authoritarian cult, I suppose I myself disapprove, but I also don't think it's useful or productive for members of the oppressor class– a white guy born in the USA– to tell the historically marginalized how they should be fighting for their liberation.

Thus I can comfortably set aside my own reservations about the market-competition/scarcity model that seems to drive Black Hammer's attempts to elevate their own profile and instead say their lateral strikes against what they see as their brand competitors (e.g. "antifa") remind me of the parable of the situationist text bound in sandpaper to obliterate the books shelved on either side.

Society, to the degree such an entity exists, is defined via violent enforcement of social and ideological norms. Society cannot exist without boundaries, and those boundaries are set and defended by members who police the social borders. Take the witch out into the woods and burn her! Punish the freak to prove you're not a freak. The defining drive of any "society" is to exile and/or discipline the nonconformist.

Because the world is an irredeemable catastrophe, there can be said to exist online societies, including various first-world "left" social constituencies patrolled by podcasters, twitterers, redditors, video-makers and other vile nonentities who build their clout by dunking on or mocking those with whom they disagree. It's basic middle-school playground stuff.

It was within that particular pseudopolitical abattoir I first saw Black Hammer using social media to elevate their profile, back when "jules bentley" was on twitter. Black Hammer put out a video where their Commander in Chief was complaining about Antifa while wearing joker facepaint, a spectacle which titillated a lot of bored online commentators:

Despite my primal urge to side with anyone wearing joker facepaint and screaming, I wasn't moved by their defense of "small business." I was however intrigued by the vehemence with which Black Hammer was castigated: the mockery from whites especially had a frantic, almost superstitiously frightened urgency I hadn't often seen outside places like kiwi farms or the whatever-chan message boards.

When Black Hammer successfully located a patron saint of "western" society to shit on, the controversy around them exploded. To spare myself speaking for them, here's their take on Anne Frank.

Outcries over Black Hammer's insufficient obeisance– some might say their gleeful disrespect– towards an icon of wronged innocence dwarfed anything that had come before. It blazed up, seemed to dwindle to embers, and then a few months later would rekindle as another wave of *~decent people~* took the bait and responded or quote-tweeted outrage over Black Hammer's iconoclasm.

We've seen the far-right fringes successfully weaponize rejection of respectability politics, using mockery of mainstream pieties to attract adherents and build momentum. Could a leftist org do the same? These stunts certainly gained Black Hammer online attention, though a lot of it was narrowly sectarian: white socialists and the softer shades of communist kept the Black Hammer name in circulation by striving (via vilifiation and ridicule) to distinguish themselves from this disreputable cadre of nonwhites. 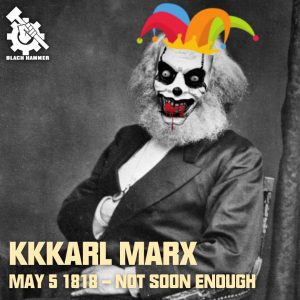 Wow, can you believe what Black Hammer said about Karl Marx? Look at this outrageous meme they made criticizing him! What I noticed, over and over, was that these virtuous white leftists seemed strangely manic in their eagerness to "dunk" on Black Hammer. If one didn't know better, one might suspect these deliriously happy honkies were actually longing to attack self-organization efforts by marginalized people, and felt, with Black Hammer's edgy dismissal of a famous holocaust victim, that permission had finally been granted. The floodgates had opened.

As the latest flare-up intensified, Black Hammer "leaked" a purported internal document indicating that the controversy was a calculated component of a long game: 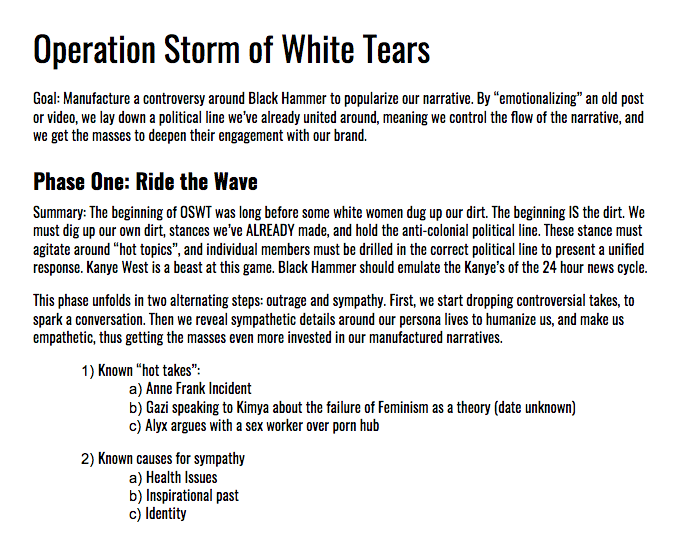 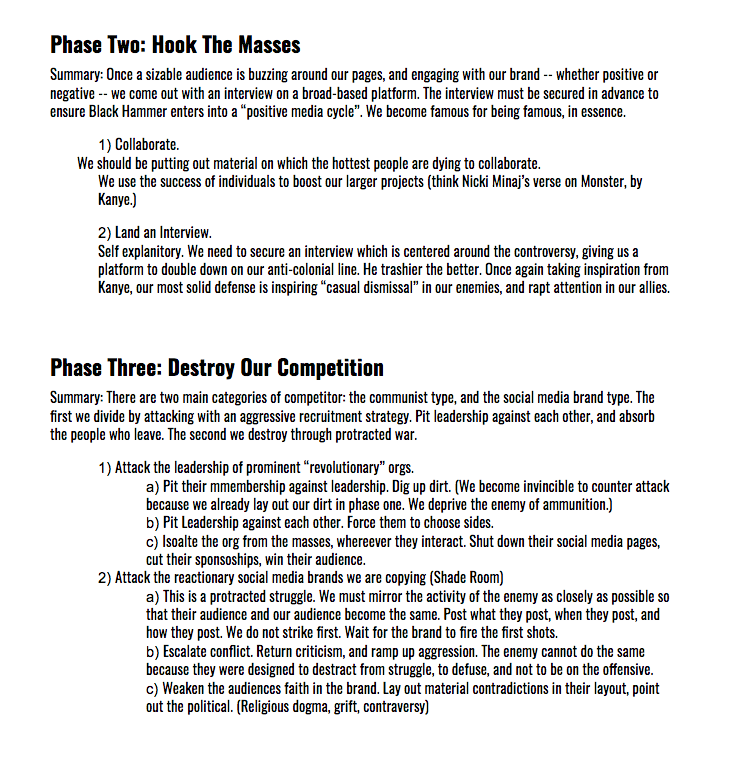 I tend to think the fact we're seeing this strategy guide at all is part of a larger psych-out, which is fine. Whether or not I buy that everything was part of some master plan from the very beginning, I'm curious whether the confluence of brand-building with revolutionary movement building will work. Can outrage-attention gained within the online attention economy be used for anything other than further entrenching the primacy of the online? Can that currency be converted?

In a reductive analysis, what Black Hammer's attempting is not unlike when someone's tweet goes viral and they post a link to their earnest little etsy shop as a reply, trying to capitalize on the fleeting notoriety.

If one is seeking followers, one must meet the potential recruits where they're at, so it makes sense for any membership org to be tweeting, reeling, tik-toking and so on. The question is to what degree, if any, this investment of energy online pays off.

While I don't want to set up a strawman of online-only political organizing, we do know the platforms themselves benefit disproportionately from the content we feed them. For every 300 spotify plays, the musician gets a dollar. For every 1000 youtube ads watched, the creator gets five bucks. For every 100 RTs of a stultified liberal going "OMG can u believe they said fuck anne frank" is there a jaded zoomer who might find "bleach demon" a funny phrase and donate a dollar to the Black Hammer gofundme?

It's been 72 hours since Fox News posted a direct link to the Black Hammer gofundme, and in that time only $750 has rolled in. Maybe I'm too materialist; maybe my cynicism about organizations' fixations on finances reflects something about me. The Black Hammer strategy guide doesn't emphasize making money, only people "engaging with [their] brand."

Still, even if one accepts the noetic dominance of "branding" terminology and framework, the language of brands is money; making money is how brands succeed or fail. Black Hammer speaks of controlling the narrative, but my fear would be that the online/branding realm is an artificial environment, as tightly controlled as a casino: when the chips are down, the house owns the chips.